Broward’s cities need to rethink laws aimed at homeless people’s behavior and focus on helping them rather than sending them to jail, commissioners said Tuesday.

Commissioners want the focus to be on housing the homeless and getting them the mental health and social services they need to keep them off the streets. Police should devote more time working with agencies that help the homeless and cities need to find alternatives to locking up the homeless for minor offenses that can keep them from getting housing later on, commissioners said.

Commissioners on Tuesday also asked County Attorney Joni Armstrong Coffey to see if the county has any laws on its books that are having a negative impact on the homeless.

Many cities use a combination of tactics. Fort Lauderdale, for instance, participates in a permanent housing program for the homeless and has police officers who connect homeless people with available services. But the city also has regulations that prohibit sleeping or storing personal belongings on public property and restricts outdoor programs that feed the homeless. The county, Fort Lauderdale and other cities ban begging for money at busy intersections.

Hollywood Vice Mayor Traci Callari said her city is working to find alternatives to arrest, but she hoped the new county policy “is not to control the policing discretion” the cities currently have.

Broward Sheriff’s Capt. Scott Russell said the goal is to make an arrest a last resort and instead try to “provide more tools, resources, to help that person.”

Russell said the county is already seeing some success, saying there has been a 20 percent reduction in the number of inmates booked without an address in the county jail since 2013.

Commissioner Nan Rich said the plan “is to engage everybody in the discussion about homelessness.”

“Maybe we ought to look at some kind of formula that places the expense probably heavier on the eastern cities, because in fact they’re the ones that experience far greater the impact of it,” Commissioner Tim Ryan said. 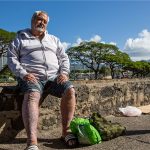