The odds were daunting and the challenge stiff.

Broward County in 2014 joined a national campaign to end veteran homelessness by the end of 2016. But to nobody’s surprise, that didn’t happen.

“We probably house well over 300 homeless veterans over the course of the year,” said Pablo Calvo, a United Way project director, about the countywide efforts.

As a result of those efforts:

• The number of identified “unsheltered” homeless veterans in the county is down to 45, and that fluctuating number has been kept below 100 for the past year;

• The Veterans Administration said more than 4,100 homeless or near-homeless veterans were assessed in Broward and Miami-Dade counties between 2011 and 2016, with 59 percent moved into permanent or transitional housing and another 25 percent referred to emergency shelters;

• The number of homeless listing themselves as veterans during anonymous, once-a-year counts conducted in January, dropped from 393 in the county in 2011to 210 last year.

The programs build their successes one at a time.

Howard Bakalar of United Way remembers one vet going several years without housing before counselors were able to persuadehim toenroll in an appropriate program.

“He’s someone who refuses to admit he has mental health issues,” said Bakalar. “He would disappear before he would allow himself to be assessed. The complexity of these issues is real.”

Sometimes, the help is small — such as paying an overdue bill — but the impact large.

“We sometimes help out with $200 or $300, and that’s all that it takes to get someone’s life back on track. If we didn’tdo that, it staysderailed and it gets worse,” said Bakalar.

Ron Book, who chairs the Miami-Dade Homeless Trust, said Broward’s numbers could improve if it would better fund homeless programs.

While Broward lists 45 unsheltered homeless veterans, there are only nine in much larger Miami-Dade, said Book, who lives in Broward.

“Broward is a long way off,” Book said. “I don’t think we’ve made nearly the level of progress that we should.”

The continuing efforts have a dual approach: getting veterans off the streets as quickly as possible and helping them avoid becoming homeless in the first place.

“We have more people coming in before they’re homeless. They’ve heard about the success stories and know that there’s help available,” said Shane Suzuki, a spokesman for the Miami VA Healthcare System that covers Broward and Miami-Dade counties.

Some of the programs rely heavily on volunteer efforts, said Ben Sorensen, a United Way advisory board member.

The help has come from attorneys taking on a case or two a year for free to assist struggling veterans dealing with bankruptcy, divorce, child support, medical bills or other issues that might push them into homelessness, Sorensen said.

Dentists have also volunteered their services, which has boosted the veterans’ self confidence and left a better impression on job hunts with potential employers.

But even with continued success, officials know the veterans still on the streets are the hardest to help. They’re the ones most likely to have severe mental health issues, substance abuse problems or a determined reluctance to accept help.

“Those are the folks you try to bring in repeatedly, but their behavioral health issues are keeping them from saying I want to come in,” Bakalar said. lbarszewski@sunsentinel.com, 954-356-4556 or Twitter @lbarszewski

“Broward is a long way off. I don’t think we’ve made nearly the level of progress that we should.”
Ron Book, Miami-Dade Homeless Trust 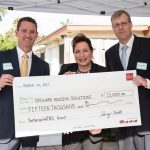